Lady Allen gained a whole new perspective on what children wanted to play with. A shiny new playground with everything in its place was not attractive to the children. Their imagination was sparked more so with nothing more than junk.

The parameters of these “junk playgrounds” allowed the children to dig, build and experiment. Adventure and creative play were significant factors in developing the playgrounds. 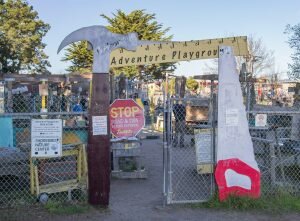 Emdrup, Copenhagen was the home of the first “junk” playground. Lacking any man-made structures, this playground was built with junk materials. Children played in this playground where they could stretch their imaginations.

Emdrup playground proved to be the beginning of many to come.

Lady Allen went on to sell her home and moved into a new house which she renovated and built a garden around. During this time she wrote several books about gardening. Again, her attention was drawn back to the playgrounds for children. 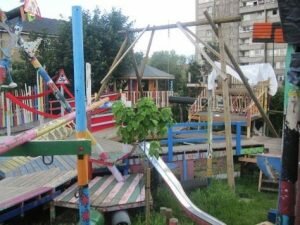 She began a new campaign to produce “adventure” playgrounds based on the Emdrup playground.

The campaign for Adventure Playgrounds

It was time to move forward with plans and development of Adventure Playgrounds. The process of negotiations, dealing with neighbors that did not support the idea and the fundraising presented challenges. The first Adventure Playground opened welcoming children. 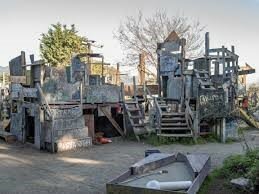 These playgrounds were at full capacity as children rode trolleys down slopes, used sticks and such to dig, creative play was in full force with an atmosphere that was friendly and happy.

Many more of these unique playgrounds followed and are now adopted in the design concept of playgrounds worldwide.

Lady Allen’s vision to provide children with a place to play was realized. Her legacy thrives throughout the world with the theory of play that is evident in playgrounds. Children’s play had returned to a more organic root and is not forced, but rather allowed to bloom.

Read about Our Lady Allen